Burney Chapman, a world-renowned farrier from Lubbock, Texas, became one of the foremost authorities on White Line Disease back in the late eighties and early nineties. At that time, he began to see an alarming increase in the numbers of white line cases he encountered in his shoeing practice both in the U.S. and U.K. Burney determined that it was not a disease of the white line, but rather the result of a fungal invasion of the middle hoof wall. Burney named the condition “Onychomycosis”, or ONC. The disease is also known as Stall Rot, Seedy Toe, Hollow Foot and Wall Thrush. At first blush almost everyone, including Burney, thought White Line Disease was found in environments that were poorly maintained. However, the more he encountered it, he began to realize the disease occurred more often in clean, well-managed stables and barns. He also observed that there was no correlation to breed, color, or front versus back feet; and that the initial stages were non-painful and usually detected by the farrier during routine hoof care.

Today, we know a bit more about White Line Disease and recognize that all horses are exposed. The medial (middle) hoof wall is the structure affected. The damage is caused by organisms commonly found in the environment, both bacterial and fungal. These organisms require a nutrient-rich environment that is lacking oxygen to flourish. The outer hoof wall is more resistant to invasion due to its higher density and exposure to environmental oxygen compared to the low density and lack of oxygen in the middle hoof wall. The third section of hoof wall, the inner hoof wall, is more resistant to invasion due to the proximity of live tissue in this area. The live tissue is not only oxygen rich, thereby inhibiting these opportunist anaerobic organisms, but also has infection fighting abilities.

Due to this, many horse owners approach White Line Disease as an external battle, but White Line Disease prevention begins with internally healthy hooves. For example, picture a castle protected by a strong exterior wall. If the people inside are healthy and thriving, the outside wall can be maintained and kept strong from outside invaders. If the castle is unable to maintain the wall, over time the outside wall will begin to deteriorate, weaken, and crumble; making it easier for outside invaders to penetrate. We can take this same example and apply it to our horse’s hooves. If we are not properly providing for the hoof internally, the outside integrity of the hoof will reflect the same. As the external protection begins to deteriorate, the hoof becomes less resilient to infections such as White Line Disease. Maintaining a healthy hoof internally begins with proper nutrition.

Proper nutrition and hoof quality are directly correlated. In fact, poor hoof quality is one of the first signs of poor nutrition. Developing a balanced diet and feeding a quality hoof supplement can provide the nutrients needed to support stronger and healthier hooves. It may also help promote regrowth and recovery for hooves suffering or damaged from white line disease.

Feeding your horse an unbalanced diet can have the reverse effect. For example, as mentioned in previous articles, excessive selenium supplementation and excessive bran in the horse’s diet are nutritional factors that can increase the risk of White Line Disease or other hoof related issues.

Although proper nutrition alone may not resolve White Line Disease, it is a vital step in building more resilient, stronger and healthier hooves. Protecting hooves externally utilizing a non-caustic topical product while also providing a quality hoof supplement is the most effective way to prevent and treat White Line Disease. Consult with your veterinarian and farrier if your horse is suffering from White Line Disease. If you have any questions, feel free to visit our website or contact us at 1-800-624-1873 or cservice@lifedatalabs.com. 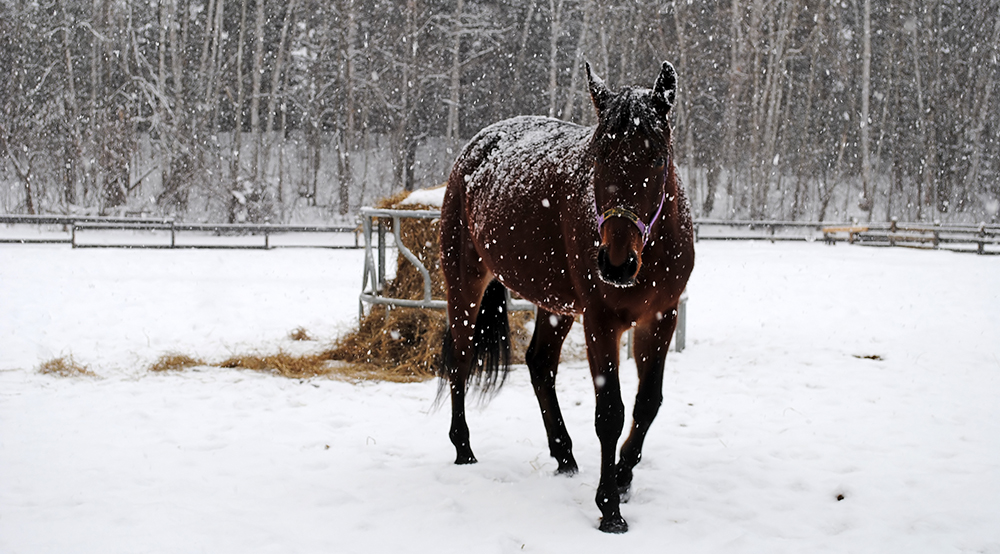 Winter is in full force and Jack Frost is blanketing many of our pastures with snow, freezing rain, and ice. Many of us are now concentrated on keeping our horses healthy, while maintaining body condition through this cold spell. We all have different routines we practice to keep our beloved horses as comfortable as possible during these months. We can debate all day between blankets VS a horse’s natural coat, or even more barn time VS more pasture time – but the one thing we cannot argue about is that proper hoof care doesn’t stop in the winter. Providing a balanced diet, staying on top of any hoof problems caused by the environment, and routine farrier work is a year-round effort. 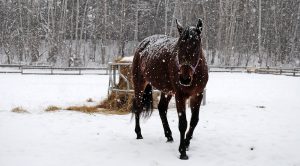 It doesn’t take an expert to see that any amount of snow is going to leave our pastures wet and muddy, and as we have discussed in previous articles, wet and muddy conditions can create the perfect environment for “hoof eating” microbes to thrive. Prolonged exposure to water can soften the hoof capsule, leading to stretching and separation of the white line area. Regardless of how much pasture time you are allocating to your horse during the winter, ensure to properly clean and dry the hooves before moving your horse back into the barn.

Even if your horse is not spending a lot of time out in the cold environment, it is still important to regularly clean your horse’s hooves. Some horse owner’s may choose to restrict pasture time due to the freezing weather. Extended periods of time in a stall might keep your horse warmer, but this confinement can create hoof problems as well. While stalled, your horse will be standing in its own waste. This exposes the hooves to different bacteria that will affect the health of the hooves. Regularly cleaning your horse’s hooves and maintaining a clean environment for your horse can help prevent problems, but issues such as Thrush or White Line Disease can develop if left unchecked. 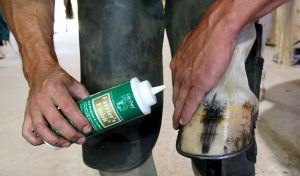 Even with regular cleaning, sometimes you may need a little extra help maintaining the health of your horse’s hooves. Regularly feeding Farrier’s Formula® will provide the nutrients your horse needs to promote stronger and healthier hooves. These stronger hooves will be more resilient to problems such as White Line Disease and will help prevent the softening of the hoof capsule. Farrier’s Finish® and Life Data® Hoof Clay® may be applied after cleanings to help fight and kill any “hoof-eating” microbes. These products will also help maintain hoof quality, and are non-caustic to you and your horse. We also recommended talking with your farrier and veterinarian to create a plan to properly care and maintain your horse’s hooves. Regular farrier and veterinarian visits are always recommended. Farrier visits should not be eliminated because of the winter season.